Mr. Van Der Snick is the principal of the Van Der Snick Law Firm, Ltd., He is a graduate of The John Marshall Law School in Chicago, Illinois and has been practicing Criminal Law, DUI and Family law since 1980.

Prior to private practice, Mr. Van Der Snick was a Supreme Court Rule 711 Clerk and an Assistant State’s Attorney in Kane County, Illinois for over 4 ½ years prosecuting a variety of cases from murder to traffic.

Mr. Van Der Snick has authored several articles published in the State Newsletter for Traffic and DUI in the State of Illinois and has been a guest lecturer for ISBA-CLE Programs, Kane County CLE programs, as well as appearing in traffic videos for the Illinois Bar Association and Kane County Bar.

Mr. Van Der Snick has lectured at the State’s Attorney’s DUI Program in Galena and the SLEA program at the College of DuPage.

In 2002, he received a Certificate of Training in administering “Standardized Field Sobriety Testing” using NHTSA standards.

In 2003, he was appointed as a member of the National College of DUI Defense, Inc.

In February 2006 he received his Certificate for Refresher for Training for National Highway Traffic Safety Administration (NHTSA) and Standardized Field Sobriety Testing.

Mr. Van Der Snick is a current member and past chair of the Illinois State Bar Association Traffic Laws and Court Section Council. He is also a member of Kane, DeKalb and DuPage County Bar Associations. 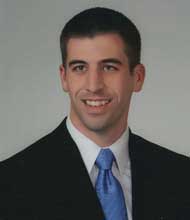 While in law school Mr. Miller was a member and the Chairperson of the Trial Advocacy Team where he competed nationally in mock trial competitions. Additionally, he was an executive board member of the Sports and Entertainment Law Association. Mr. Miller worked as an extern in the Porter County Prosecutor’s Office in Valparaiso, Indiana in 2010. During his last year of law school he worked in the Valparaiso University Sports Law Clinic as legal counsel for amateur athletes. As a member of the Sports Law Clinic, Mr. Miller litigated in Manhattan in front of the International Court of Arbitration for Sport, the highest international court for amateur athletes.


See Map and Directions to our office